It is great to see the first OpenLaszlo book on the market. The book presents straightforward tutorials which do a good job of introducing the LZX you need to know to build simple applcations. If you are someone who really likes to have a physical book rather than on-line documentation this book will give you a good foundation in learning OpenLaszlo. When introducing new classes, the book provides a graphical class hierarchy to illustrate how the class fits in. In addition to the basics, Chapter 15 details a Google Maps application by Manabu Togawa which provides a good real-world example of browser integration. 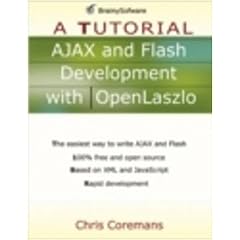 “In fact, female performance in high school mathematics now matches that of males. If biology were the basis of that, we’ve seen some major evolution in the past decades.”

According to a recent “study,” women are being overlooked or actively ignored for promotion and the committee could find no reason for the discrepancy in gender representation. This committee of experts ruled out “biological differences in ability, hormonal influences, childrearing demands, and even differences in ambition.”