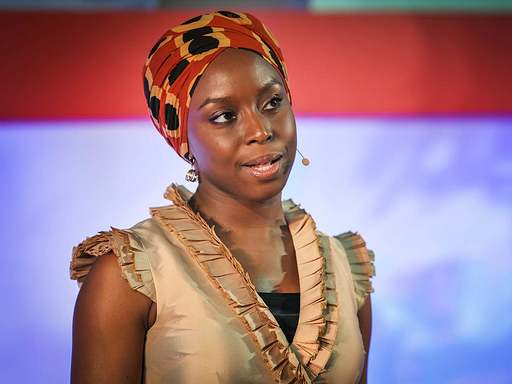 She introduces the talk telling about how reading British and American children’s books influenced her own childish writings that featured foreign landscapes and experiences, rather than drawing from her own life. I remembered how my mom pointed out to me years later the drawings I had made when we lived in Saint Lucia. All my houses had chimneys, even though we lived in this very hot, tropical climate with no fireplaces.

It is impossible to talk about the single story without talking about power. There is a word, an Igbo word, that I think about whenever I think about the power structures of the world, and it is “nkali.” It’s a noun that loosely translates to “to be greater than another.” Like our economic and political worlds, stories too are defined by the principle of nkali: How they are told, who tells them, when they’re told, how many stories are told, are really dependent on power… Power is the ability not just to tell the story of another person, but to make it the definitive story of that person.”

It resonates with me how the negative stories flatten her experience. The creation of stereotypes by such storytelling is problematic not because they are entirely false, but because they are incomplete. “They make one story become the only story.”

“The consequence of the single story is this: It robs people of dignity. It makes our recognition of our equal humanity difficult. It emphasizes how we are different rather than how we are similar… when we reject the single story, when we realize that there is never a single story about any place, we regain a kind of paradise.”

One thought on “the danger of a single story”